We went to the 18th annual Tanglewood Wine Festival on Saturday, May 26th, and it exceeded, met, and fell short of my expectations — and I’m okay with that. 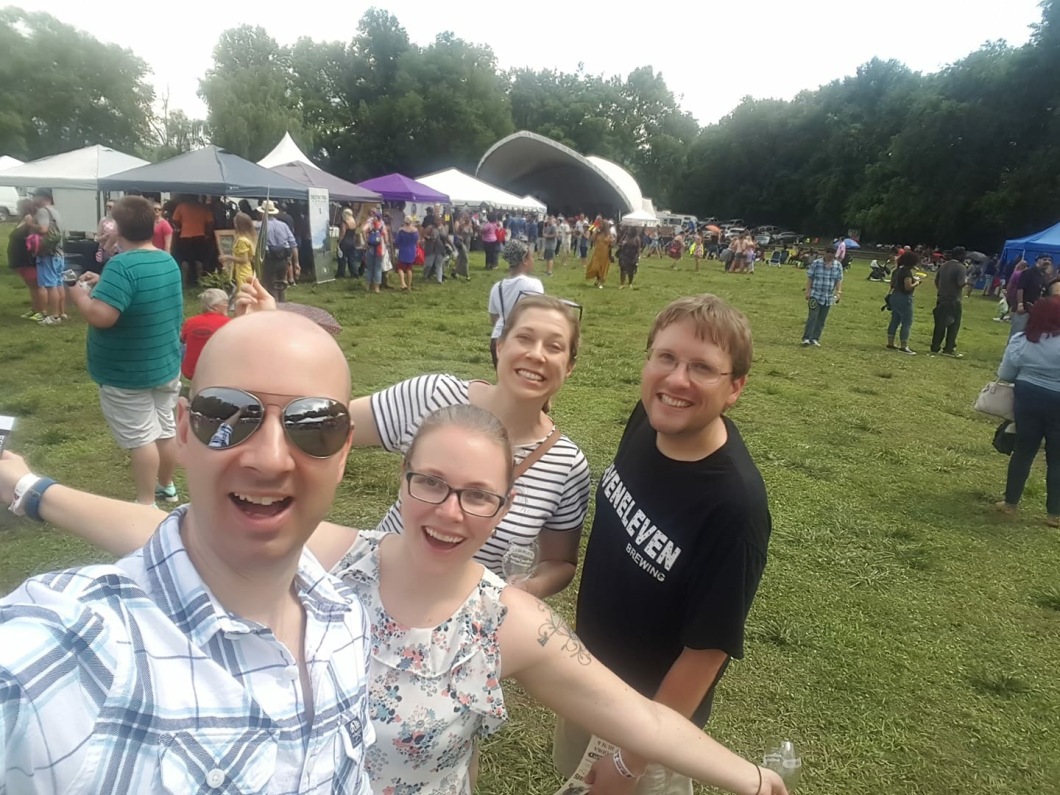 The Wednesday before the festival, I was walking on the paved trail at Tanglewood and noticed a couple white tents already being set up in the wide, grassy yard where the festival was going to be. A man with a couple dogs stopped and asked what I thought they were for and if I was going to the festival.

“What do you think it’ll be like?” he asked.

“Probably chaos and a bunch of drunk people.”

“I think I might skip it,” he hedged, pulling his tiny dogs with him.

Well, that’s what I’ve said every year, too, until this one. I saw the sponsored post on Facebook a few months ago and told my husband, “This is it, baby! We’re going!”

I’d only been to beer festivals before, where you get maybe two good-sized pours in your little glass at each tent and skip along to the next to wait in line. Even despite the crowds, you still get pretty tipsy by the end, and — I remember this from the Oktoberfest that used to be at Tanglewood — some drunk people get aggressive.

Wine has a higher ABV than beer, and although I knew the pours would be smaller, I figured the drunkenness would be just as bad, if not worse, at a wine festival. (Minus the aggression. I’ve never known a wine drinker to wanna punch somebody.)

I also figured there would be a lot of big names at this shindig. There was going to be not only wine but beer and liquor, too, which seemed like it would draw a lot of local breweries and distilleries.

One look at the map told me I was wrong. I recognized a few names, like Pig Pounder, Duplin, Childress, and RagApple Lassie, but most were unfamiliar. The weather was looking to be hit or miss — there were scattered showers all over the area for most of the day — which may have resulted in some pulling out at the last minute. Or this thing has a reputation I don’t know about. All of it made me skeptical.

For my first drink, I decided to try Native Vines from Lexington, which served mostly sweet fruit wines. That, I found, was a trend among the tents, but a not unwelcome one. In any other situation, I would opt for a dry red or white, some standard varietal like chardonnay or cabernet sauvignon, but given how hot and breezeless it was, the fruit wines were more refreshing. 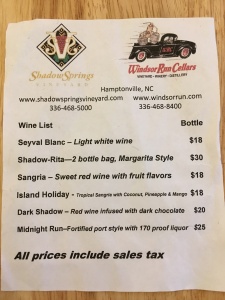 Another tent I liked was Shadow Springs Vineyard and Windsor Run Cellars. Margarita-style wine? Yes, please! Even the sangria was pleasing. I wasn’t big on any wines with coconut that day, which I noticed at a few places, but the dark chocolate infused wine and the “fortified port-style” wine (they added brandy to it) at this particular tent were so divine, I bonded with a stranger over them.

I was surprised that, unlike a beer festival, each tent treated the serving like a typical wine tasting. People lined up at a table, and they poured a tiny amount of the first wine into each glass, then the next wine, and the next. Given that each tent served at least a few types of wine, the wait was welcome when we moved on to the next tent.

Having tried a few others that didn’t impress me as much, I went back to Native Vines and got a bottle of the White Buffalo to share, a semi-sweet chenin blanc “with soft notes of peach and honey.” Still too sweet for my everyday palate, it was delightful to drink in a camping chair before an impending rain shower.

And just before we got soaked, we wandered over to Brothers Vilgalys, which I’d learned about from my husband randomly buying Krupnikas at the ABC store a couple years ago. Based in Durham, the distillery produced Baltic-style spirits of which you have never before heard or dreamed of. Although Krupnikas, a spiced honey liqueur, comes from “an old Lithuanian recipe,” the others, the owner told us, were largely created from experiments he took to friends’ parties in Durham. The ones empty by the end were considered successes.

I really liked Beebop, a “tart and savory” liqueur with things like rhubarb, allspice, and coriander. It’s amazing the flavors so many herbs can create, and each spirit was unusual and delicious in its own way. I can see talented mixologists taking any of them and making unique and delicious cocktails.

Will I go to the Tanglewood Wine Festival next year? Probably not, but at least there weren’t any fights and no one seemed falling-down drunk. I’ll likely save my money for other festivals I haven’t tried yet, like Spirits of Summer.