Let me just say, I’ve had a complicated relationship with Foothills Brewing over the years. On one hand, I want to support a local brewery, whose distribution area is now about 300 miles. (Is that “too big” for local beer? I’m torn.)

On the other hand, I haven’t been impressed with a lot of their beers. The hyped-up Sexual Chocolate, for instance, didn’t sit right with me when I first tried it at Fourth Street Filling Station a couple years ago. (Although that’s one more to add to the list of beers I should try again since I’ve really gotten into dark beers.)

I’ve been to the downtown pub on numerous occasions, and about the only thing I venture to drink is the People’s Porter, a solid but otherwise ordinary brew.

Of course, everyone’s tastes are different. I have friends who love the Carolina Blonde cream ale and the Pilot Mountain pale. My husband’s fallen back on Hoppyum at restaurants countless times, and I haven’t been averse to stealing a bottle at home when he’s bought six packs.

But we like what we like and our tastes change over time (says the girl who drank only Beringer white zin for years). Now that my taste buds are a little more experienced, thanks to writing the Barstool column for Triad City Beat for a few months and via my own explorations, I can say with conviction that I do like Foothills, just certain beers, like these two: 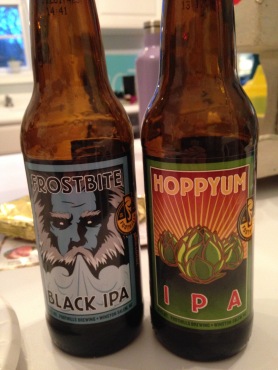 I go back and forth between drinking dark beers and IPAs, so the Frostbite surprised me since it’s two in one. I love the IPA taste. (Don’t look at it as you’re drinking it, and you’ll know what I’m talking about; the dark color makes you think it’s a porter or stout). But the malt brings a nuttiness that can’t be denied. Sorry, Natty Greene’s Red Nose. I think this is my new winter grog.

For a long time, I refused to admit how awesome Hoppyum is. I don’t know why. I’ve found some other IPAs I like better or as much as Hoppyum, and maybe its local ubiquitousness took it down a notch in my subconsciousness. But a recent revisit of this from my grandparents’ fridge (which normally houses Yuengling) made me realize that I do, in fact, like Hoppyum, and it can compete with the best of ‘em.