There aren’t many bars or breweries where I like to consistently go and hang out. I prioritize friendly bar staff, a comfortable space, the availability of (complete) board games, and comfortable seating.

To my knowledge, no place in my area has all of these, but Joymongers Barrel Hall and Taproom in the West End neighborhood comes pretty close. 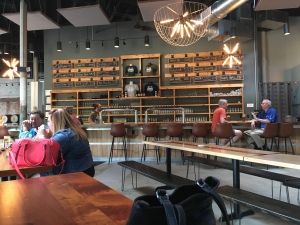 I first went to Joymongers in Greensboro (the original) shortly after they opened. All of the beers I tried were phenomenal — to the point I couldn’t believe they all came from the same place.

So when they opened a second location in Winston-Salem, I was thrilled. I was also hoping for more comfortable seating and a better atmosphere. The high ceilings help, as do the gritty, peeling walls that give it some character. (It used to be an auto shop.)

I’m not a huge fan of their IPAs — the double and Brux are exceptions — but the grisette, milk stout, barrel-aged Baltic porter, red wine barrel-aged weizenbock, and bourbon barrel-aged barleywine are a few of my favorites.

I have so many good memories of this place. Chilling with my sister when she came into town. Going out with my parents for my husband’s low-key birthday gathering. (My mom brought a killer picnic spread.) Playing Pop-a-Matic Trouble and cards with my husband on Sunday nights. And the chairs at the bar are to die for.

On top of all that, I got to write about the artist whose work graces the labels of most of the bottled stuff. He’s an old band buddy of the owner’s. I love the two weizenbocks with the kissing birds; they’re on my mantle right now to celebrate February. And the sea serpent’s scales are actually stamps. There’s nothing like great art and the gentle, creative spirit who makes it.

So go check out Joymongers Barrel Hall & Taproom, even if you live close to the Joymongers in Greensboro. You won’t be disappointed.