ABQ, I Love You

I’ve never been in a position where I wanted to escape to the city, but that’s where I found myself a couple weeks ago.

I spent two days in Albuquerque to check out more breweries and see more of the city — and what better way to see it than by tram up the Sandia mountains?

But let me back up because the first thing I did when I got to my Airbnb was open the fridge and find a variety six-pack of local beer.

I was delighted! I tried the Santa Fe stout (meh; coffee), the Tractor Brewing dry apple cider, which would be great for chillin’ on my deck in the summer, and the Ponderosa Blood Orange Double Wit — D-I-V-I-N-E. Even in a can, I was amazed by how good it was. If only blogs were scratch and taste! Just think lots of citrus plus spices like cinnamon and maybe cardamom. It wasn’t overwhelming at all, and I don’t normally like fruit beers.

One of my favorite things about traveling is walking around a city that first night. Memphis was surprisingly not dead during the workweek (and I’m not even talking about Beale Street), and Louisville is kinda scary.

Downtown ABQ, in the meth capital of the world, was well-lit and bustling. I walked past Belgian bar Duel Brewing, where a DJ blasted music and single guys lined the bar (no thanks), so I settled into Boese Brothers. This place was incredible! They had a nice alleyway hangout space with lights, murals, plants, and picnic tables, and the fact they don’t bottle or can their beer made me think of Joymongers before they expanded. 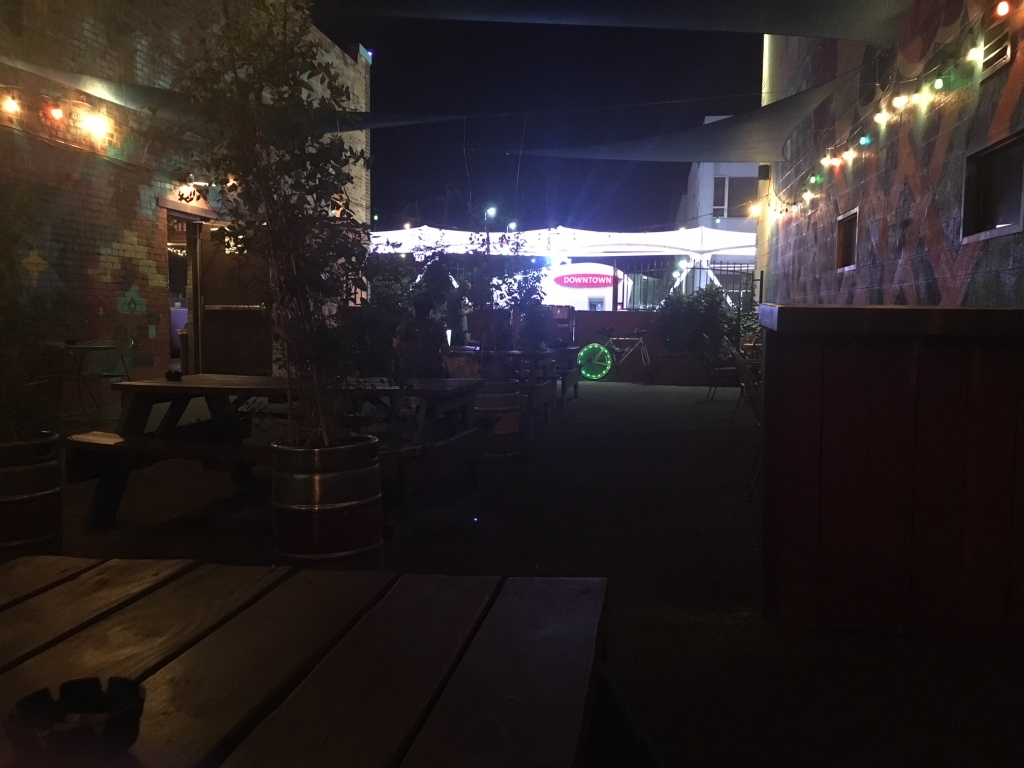 And the beer — WOW. The Zeus Juice white IPA is the best of its kind. The New Mexican IPA was pretty good, too, although the bartender didn’t seem to know what made it “New Mexican”; sounds like the brewer might be trying to start a trend in branding.

La Cumbre is situated more on the industrial side of town. The day I went, the wind was blowing heavily, which meant grit in the mouth when I tried to sit outside. Why anyone else was attempting to was beyond me! So I went back in, which was not a bad thing. Their bar feels very New Mexican, with exposed wooden beams and wooden chairs and tables, kind of like a restaurant I went to in Chimayo. They also have a sweet mural of indigenous women — hopefully done by a native artist, but I didn’t ask. There’s a side room that was quieter, so I set up along the wall and read transgender poet Diana Goetsch’s In America. Before I knew it, several other loners had taken up nearby, making it Introvert Corner.

I’ve already written about how much I like La Cumbre’s Elevated IPA, so I decided to try something different: an apricot saison. My saison-loving friends would probably like it, but it’s not my thing. At least the apricot was in good proportion. I also tried Project Dank, which sounds exactly like what it is — their attempt at making the dankest IPA ever. They may have succeeded; I gave it a 3.50 out of 5 on Untappd.

I wasn’t able to make it back to Marble Brewing, but I’ve since tried their Double White on draft (a double wit like the one from Ponderosa, minus the blood orange and spices), and it’s nommy nommy hazy nommy. Marble, I’ve found, makes consistently good beer. I hope they make it out to the East coast.

I didn’t get to Bosque, either, which is on the UNM side of town, even though I went to the museums of art and anthropology on campus. Sometimes, it’s just not the right time for beer. (Blasphemous!)

And poor Miss Lucy. She doesn’t get any beer ever.

Follow me on the Untappd app at katspastlife. Next stop in a couple weeks: Denver!